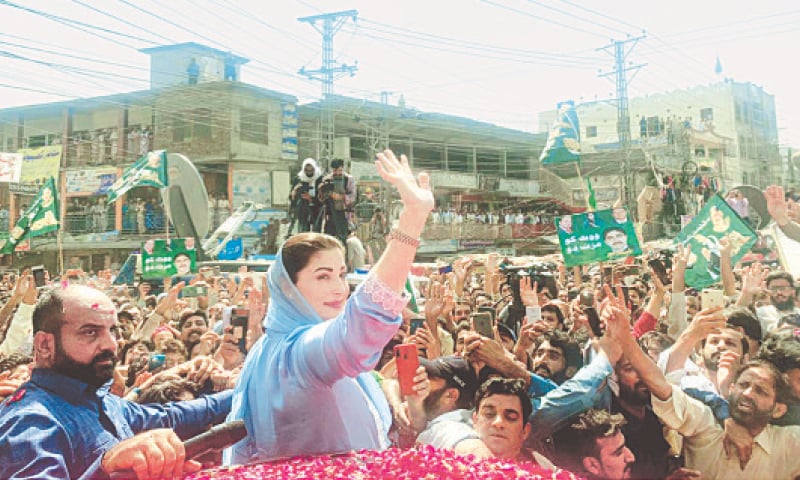 • ISPR reveals party leader’s meeting with army chief, ISI DG
• Ex-governor Zubair claims no relief for Sharifs was requested
• In remarks to media after court hearing, Maryam insists political decisions be made in parliament not in GHQ

ISLAMABAD: In a startling revelation that further jolted the anti-establishment image of the main opposition Pakistan Muslim League-Nawaz (PML-N), Pakistan Army on Wednesday disclosed that former Sindh governor Mohammad Zubair had twice reached out to Chief of the Army Staff Gen Qamar Javed Bajwa and discussed political and legal woes of deposed prime minister Nawaz Sharif and his daughter Maryam Nawaz in the past few weeks. 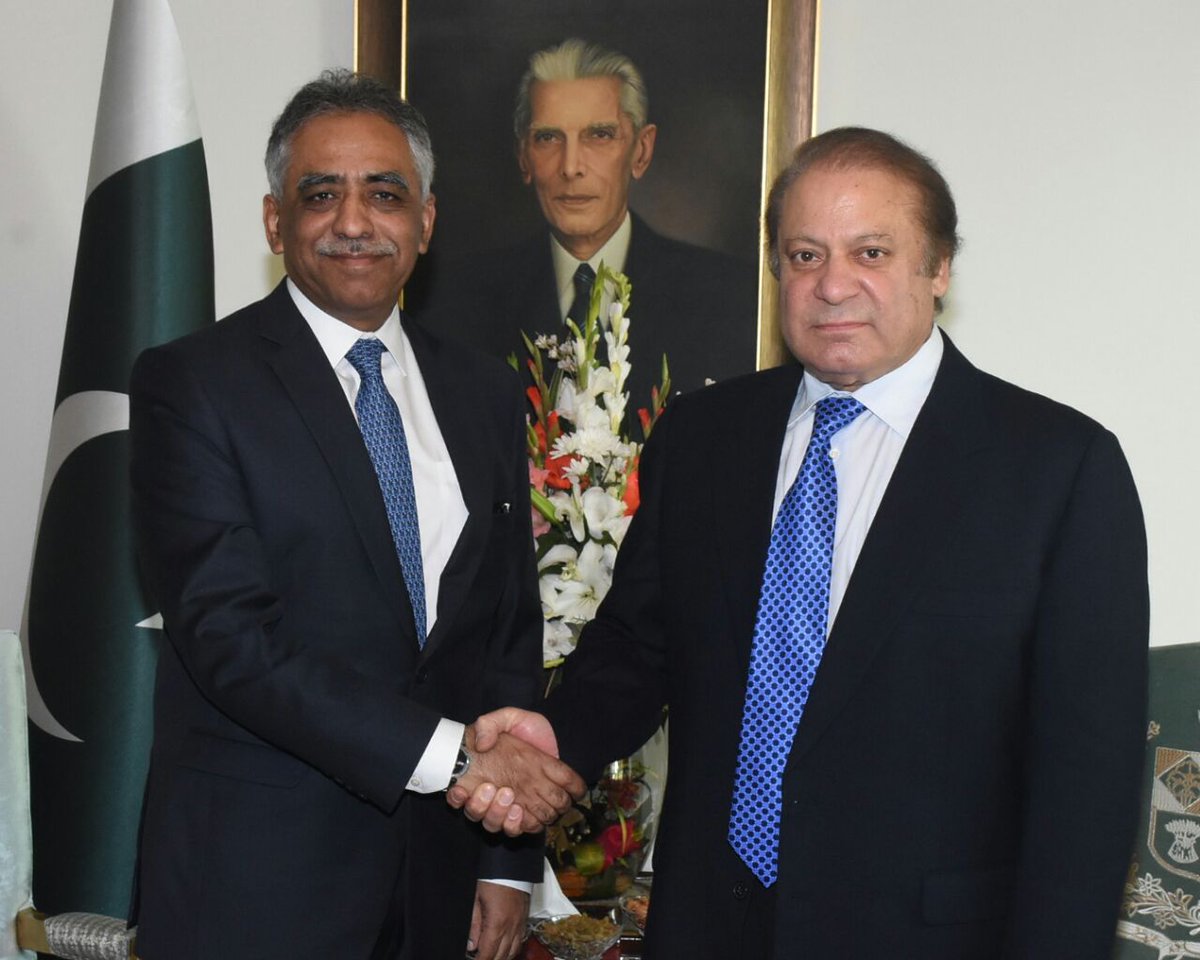 “Mr Zubair twice met the army chief, once in the last week of August and then on September 7 in the presence of director general ISI,” revealed military spokesman Major General Babar Iftikhar in a TV talk show.

Both meetings, he said, were held on Mr Zubair’s request.

“In those meetings he (Mr Zubair) talked about Mr Nawaz Sharif and Ms Maryam Nawaz,” the director-general of Inter-Services Public Relations (ISPR) said.

The disclosure by the DG ISPR came just hours after PML-N’s senior vice-president and former prime minister Shahid Khaqan Abbasi told a news conference in Lahore that none of the party members had held one-on-one meeting with the army chief in the recent past.

This is the second time this week that opposition leaders’ secret contactswith the military leadership were made public. The disclosures follow Mr Nawaz’s hard-hitting speech at the opposition’s September 20 multiparty conference in which he had lashed out at the army, saying there was “a state above the state in the country” and the conference’s communique calling for an end to “establishment’s interference in politics” and “no role of armed forces and intelligence agencies” in future elections.

The interaction was held on military’s invitation for a discussion on the impending changes in the constitutional status of Gilgit-Baltistan though political issues and opposition’s concerns also came up for the discussion.

Major Gen Babar said the COAS during his two meetings with PML-N leader and ex-governor Mohammad Zubair “made it clear to him that their [Sharifs] legal issues would be addressed in court, while political matters were to be dealt with the parliament”.

The military spokesman added that Mr Zubair was categorically conveyed that the military should be kept out of political matters.

Also appearing on television channels afterwards and later through his official social media account on Twitter, the former governor did confirm his contacts with the military leadership while claiming that he had gone to discuss economic issues. However, he admitted, Nawaz Sharif and his daughter Maryam did come up for discussion.

“Gen Qamar Bajwa is an old friend and not only that I have met him many times as a friend but our families have also been meeting cordially over dinners etc. In my most recent meeting with him economy, politics and, of course, Nawaz Sharif and Maryam Nawaz, all came under discussion. No relief was ever requested,” tweeted Mr Zubair.
Talking to one of the TV channels, Mr Zubair expressed his surprise over the DG ISPR’s statement. “Such meetings are secret. I don’t understand as to why the army spokesperson needs to talk on [my meeting with the army chief] it,” he said.

A senior PML-N parliamentarian, speaking on the background, said he wasn’t surprised to hear about the party leadership’s “backchannel contacts” with the military establishment. He said it was pragmatic to have both private and public channels. The Sharifs, he said, sought the private channel through their close confidante who flaunted his personal contacts with Gen Bajwa in the party.

The Leaguer agreed with the perception that Nawaz Sharif’s scathing remarks about the army at MPC could be a result of the impression he got from the contacts that there was no flexibility on the other side. “Therefore, he would have gone for the second track, the public one,” he maintained.

He said it was an open secret that the party supremo’s departure for London had been facilitated.

He also disclosed that Jamiat Ulema-i-Islam (Fazl) chief Maulana Fazlur Rehman, too, had met Gen Bajwa around the time of the sit-in in October 2019.

“These contacts have always been there,” the PML-N leader emphasised.

Earlier during a brief media chat in the day after attending court hearing of her appeal against her conviction in the Avenfield Apartments reference, PML-N vice-president Maryam Nawaz said the political decisions should have been made in the parliament and not in the General Headquarters (GHQ).

“I believe the issue of Gilgit-Baltistan is a political matter and political decisions should have been taken within the Parliament not in the GHQ,” she then asserted.

In response to another question whether the PML-N’s supreme leader and his father was aware of that meeting, she replied: “I don’t know [if] he was aware of it or he learnt it [after the meeting took place]. However, it is my persistent view that political leadership should never be invited or go to discuss these issues.”

“Anyone who wants to discuss such issues should come to the parliament,” she said.

In the Lahore presser, PML-N stalwart Shahid Khaqan Abbasi claimed that neither Khawaja Asif nor any other party leader held “one-on-one meeting” with the army chief. He said the parliamentary leaders’ meeting with the army chief on the GB issue was not “secret” but not for public consumption.

Asked whether Nawaz Sharif was taken into confidence by Shahbaz Sharif or any other leader regarding PML-N leaders’ meeting with the COAS, Mr Abbasi said: “It is not in my knowledge”.

However, Railways Minister Sheikh Rashid while talking to a private news channel on Wednesday said the PML-N leaders had two meetings with the COAS in the last two months.

Earlier, a division bench of the Islamabad High Court comprising Justice Aamer Farooq and Justice Mohsin Akhtar Kayani heard the appeals of Maryam Nawaz and her spouse retired Captain Mohammad Safdar against their conviction in the Avenfied Apartments case.

While observing that the matter related to the proclamation of former prime minister Nawaz Sharif in the case had yet to be decided, the court deferred the proceeding on the appeals till December 9.

When the court inquired from additional attorney general Tariq Mehmood Khokhar on progress on execution of arrest warrants of the ex-premier, he replied that the Royal British Mail had delivered the notice to his son Hassan Nawaz on September 18.

Mr Khokhar said a private secretary of the Sharif’s son, Waqar Ahmed, had contacted an official of Pakistani High Commission in the UK, Dildar Abro, and informed him about willingness of execution of the arrest warrants.

When the court asked about the progress on execution of the warrants through County Court London, Mr Khokhar replied that the response of the British foreign ministry was awaited.
Source
Advertisement

Lol..........so the party that was accusing PTI of being selected, is now caught with its pants down, and wants Sh. Rashid charged for what, pulling N leagues pants down?
News flash Rana....your belt was broken to begin with.

Will_Bite said:
Lol..........so the party that was accusing PTI of being selected, is now caught with its pants down, and wants Sh. Rashid charged for what, pulling N leagues pants down?
News flash Rana....your belt was broken to begin with.
Click to expand...

hahaha true.. these are jokers..
K

This is too much mr killer of Model town your masters nawaz and shabaz financial and political corruption has been exposed very badly , Peoples of Pakistan now understood how you made them fool ,bloody double face and hypocrites.

PML-N wants to create a feeling of hate against armed forces by spreading lies. Should be dealt with iron hands.

Back in 2014, during the dharna, IK and Dr. TUQ went to RAheel Sharif for a meeting.....and later it was disclosed by ISPR that PMLN had asked for that meeting.
Same story...same characters....just a few years older.