A picture worth billion words.

See the Face of this man and his relatives/friends after he got death sentence, And look at the face of the police man. That's the true picture worth Billion words.

Even Imran Khan cannot do anything to change this corrupt system. After spending 126 days in Dharna, he tried his best to change the system but all in vain. Seems that there is no way to change it other than through the bloody revolution.

What is the present position of this case now ? he is still in Jail ?
T

جمہور پسند said:
What is the present position of this case now ? he is still in Jail ?
Click to expand...

The killer family were threatening the victim's family so they withdrew the case and forgave the killer in the name of Allah.....
Last edited: Jul 25, 2015
K

Who dares to put him in jail,,,,,,No way..these type of rascals will never be in jail or get any sentence..


Illidan Stormage said:
The killer family were threatening the victim's family so they withdrew the case and forgave the killer in the name of Allah.....
Click to expand...

The judicial system along with their judges is really blind with the lights of money.

They failed to find rigging in the election, When we imagine we feel sorry for ourselves...What did they need exactly to believe that elections were rigged...?????

جمہور پسند said:
What is the present position of this case now ? he is still in Jail ?
Click to expand...

The victim's family was sent to Australia by the killer's family.
That was the deal.
S

The way to a true revolution, when every single person in bureaucracy, army and political system will have to face justice, is what i can see approaching very fast inshallah.

Thats just a new way of crying by PTI chichoray now. This pic is definitely not after his death senetence!
D

Brother...don't lose hope In Sha Allah this system will change at the hands of IK...it'll take its due time...noora has been deeply rooted, will take efforts and sacrifice to get back on track...
M


In Islamic law.... victims of crime are recognized as having rights. The victim has a say in how the criminal is to be punished. In general, Islamic law calls for murderers to face the death penalty. However, the victim's heirs may choose to excuse the murderer from the death penalty in exchange for monetary damages. The murderer will still be sentenced by a judge, possibly to a lengthy prison term, but the death penalty will be taken off the table.


This principle is known as Diyyah, which is unfortunately known in English as "blood money." It is more appropriately referred to as "victim's compensation." While most commonly associated with death penalty cases, Diyyah payments can also be made for lesser crimes, and for other acts of negligence (ex. falling asleep at the wheel of a car and causing an accident).
T

Pak Falcon said:
Thats just a new way of crying by PTI chichoray now. This pic is definitely not after his death senetence!
Click to expand... 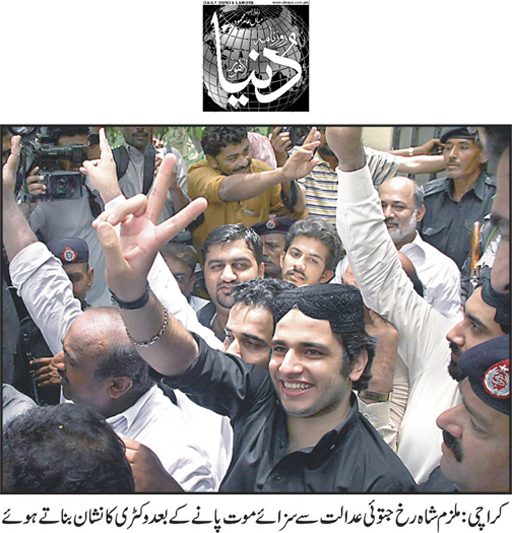 What about the picture above? Your are ignorant fool. And don't malign the image of ISI by putting it's logo as your DP.

This picture pretty much sums up judiciary of Pakistan. thanks for sharing

Alas! Even Rigging is now legalized. No matter how much a candidate riggs in his constituency it will be called irregularity not rigging.
R

What u need is around 5 million people on streets, shut down Lahore, Islamabad, Rawalpindi and another city or two. And just stay sitting there not allowing system to fuction. Another idea would be hundreds and thousands outside parliament house whilst all the parliamentarians are there. Or millions towards PM house this time go in and do not allow govt to move.

If police attack hit back and teach them a lesson, once a good lesson is taught they will not do it again. Have a big banner with all the crooks faces on it so everyone knows what the people are up against.

NO bloody revolution not required...... the country cud go into a meltdown, enemies of PK may want that too happen.

What about the picture above? Your are ignorant fool. And don't malign the image of ISI by putting it's logo as your DP.

And you are an ignorant idiot what has my dp to do with this idiotic post? You are crying that IK did his best to change judicial system but the fact of the matter is he has accepted that judicial system he isnt criticizing it. Now dont support IK or stop crying and shut up!
You must log in or register to reply here.
Share:
Facebook Twitter Reddit WhatsApp Email Share Link
Sponsored Link