PTI, MQM battle it out with resolutions in Sindh Assembly

Premium Member
Become a premium member
PTI, MQM battle it out with resolutions in Sindh Assembly 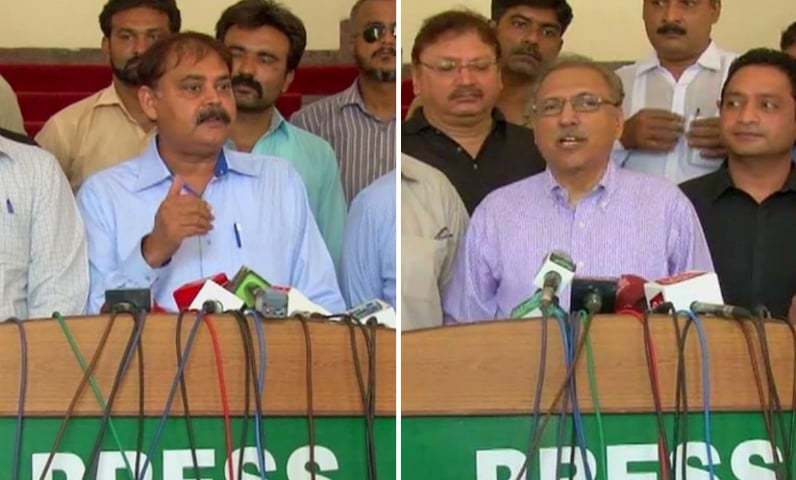 KARACHI: Pakistan Tehreek-i-Insaf (PTI) and Muttahida Qaumi Movement (MQM) spent Wednesday afternoon moving resolutions against one another in the Sindh Assembly, both inspired by what they say is the other's criticism of the armed forces.The PTI resolution asks the Sindh government to approach the centre against statements made by MQM supremo Mr Altaf Hussain over "interference by a British citizen in the internal affairs of our country",

It highlights that the MQM leader has on various occasions made "anti-Pakistan" statements, and demands for his British citizenship to be revoked so he can return to Pakistan and be tried in court.Referring to recent reports about multiple First Information Reports being filed against the MQM chief, PTI member Dr Arif Alvi said, "Don't treat this as a joke. These FIRs are being filed out of desperation." 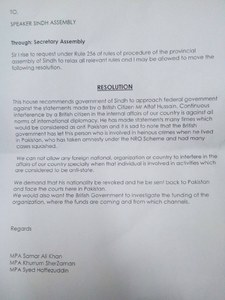 In its resolution, the party also wishes for the British government to investigate the sources and use of funding for the organisation. 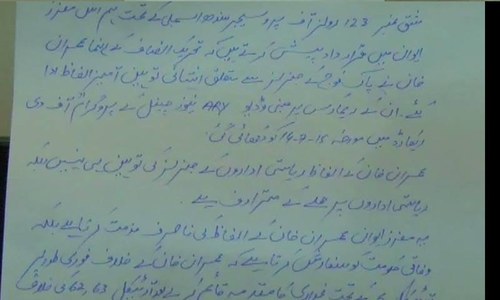 In what appears to be a rejoinder, the MQM also moved a resolution against Imran Khan in the Sindh Assembly.
The resolution, which calls for Khan to be de-seated from the National Assembly, says the PTI leader has made "disrespectful comments about Pakistani Army generals". Speaking to reporters outside the Sindh Assembly, MQM leader Muhammad Hussain said, "All Pakistanis saw the video [referred to in the resolution] and heard the words Imran Khan used in that gathering ─ 'If we gathered 20,000 people, then Pakistani generals would wet themselves'."

The resolution refers to a video of Imran Khan making these remarks which, it says, was recently played on a news channel.
It further says that these remarks can be construed as an attack on a state institution and calls for strict action against Khan under Article 6 of the Constitution. It also says that under Articles 62 and 63, his membership of the National Assembly should be terminated.
Meanwhile, Gadap City police on Wednesday lodged an FIR against MQM chief and other party leaders on charges of ‘hate speech’ against the armed forces.

“Police have registered FIR 84/2015 on complaint of Abdul Aziz Gabol against Altaf Hussain and 25 others,” said Gadap City SHO, Khan Nawaz.He said that the case has been registered under Sections 120, 121, 122, 123, 123-A, 109 and 25 of the Pakistan Penal Code.
These Sections pertained to waging or attempting to wage war, collecting arms with intention of waging war against Pakistan, condemnation of creation of the State and abatement etc.

The PTI and MQM have been in a bitter rivalry since the run-up to the May 2013 general elections.
Just a day after the May 11 polls in 2013, PTI held a protest gathering at Teen Talwar in Karachi's Clifton area, against what was described as "massive rigging" in the elections, especially Karachi's NA-250.In a telephonic speech that night, Altaf Hussain had expressed his discontentment over the protest and retaliated against allegations of rigging by the PTI.

A week later, PTI's Zahra Shahid was shot dead outside her home in DHA, Karachi. PTI chief Imran Khan at the time openly held Altaf Hussain responsible for the killing.Take a look: MQM dubs Imran statement 'Altaf phobia'Most recently, the two parties locked horns over by-polls in Azizabad's NA-246 constituency ─ believed to be an MQM bastion ─ when PTI's Imran Ismail was pitted against MQM's Kanwar Naveed Jamil. Activists were involved in scuffles on more than one occasion during the run-up to elections.
The PTI and MQM also have conflicting viewpoints of Rangers' operations in Karachi.

Last week, the PTI had filed a resolution demanding an extension of the Rangers stay in the city, while the MQM, after appealing for the removal of the Sindh Rangers from Karachi, called for a referendum to gauge support for the paramilitary force's presence in the city.