The South Asian nation intends to float a tender to purchase one LNG cargo per month for 10 to 15 years, said Shahid Khaqan Abbasi who is overseeing the energy sector for Prime Minister Shehbaz Sharif. The government is still deciding the timeline for when to issue the tender, which they will use to gauge the market response and pricing, Abbasi said in an interview.

Sharif’s government will also speak with LNG suppliers in the Middle East, including Qatar, the UAE, Saudi Arabia and Oman, for a long-term contract, according to Abbasi. Pakistan last week said it’s not ruling out a potential gas supply agreement with Russia.

Pakistan depends on overseas LNG for power generation, and was hit particularly hard by the surge in spot prices and supply disruptions. The cash-strapped government resorted to planned blackouts to conserve its dwindling supply of fuel.


Asian LNG spot prices are trading at a seasonal high after Russia’s invasion of Ukraine exacerbated an already tight market. Pakistan was forced to purchase several expensive LNG shipments from the spot market to keep the lights on last month. Long-term deals are much cheaper than current spot rates, and may provide some relief for Pakistan’s government.

Abbasi, who is a former prime minister and energy minister, signed several long-term LNG supply deals with Qatar, Eni SpA and Gunvor Group in 2016 and 2017.

However, Eni and Gunvor have canceled several scheduled cargoes to Pakistan in the last year, exacerbating the nation’s energy shortage and fueling political instability. The suppliers backed out by paying a 30% penalty on the cost of the shipment, which is envisaged in the contracts if they cannot deliver.

The government will keep the 30% clause in future deals, said Abbasi, who explained that it is standard in contracts.

Pakistan is also open to signing a 30-year contract to make sure it has enough fuel to power its economy well into the future, said Abbasi. Today, the industry’s longest deals rarely top 20 years.
Source

Bloomberg - Are you a robot?
Advertisement

The imported beggars have ruined the economy in less than two months.The stock market has crash,the rupee exchange rate is 208 to US dollar.No one is willing to lend money to Pakistan.The country is isolated.It has no standing in the world.

Pmln last lng deal signed by khaqan for 15 years was at 13.37% of brent whereas pti signed it for 10.2% of brent. Besides when international demands rises, these cargo companies default and pakistan has to purchase at spot. 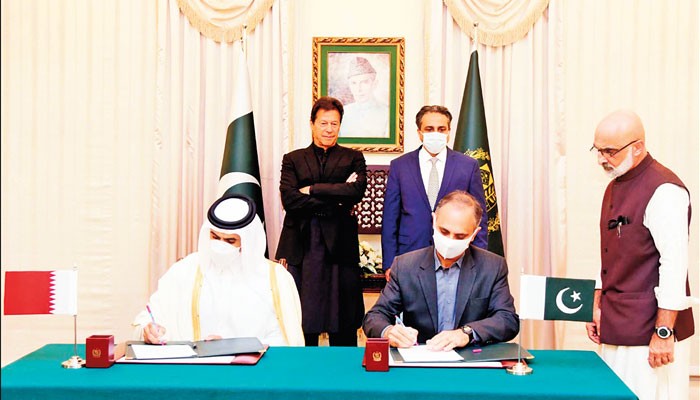 ISLAMABAD: Pakistan has signed a new LNG deal for 10 years at 10.20 percent of Brent with price opening clause after four years. Under the contract, Qatar will provide Pakistan three million tons...

ISLAMABAD: Pakistan has signed a new LNG deal for 10 years at 10.20 percent of Brent with price opening clause after four years. Under the contract, Qatar will provide Pakistan three million tons...

Commission khayenge, udher solar panel parks ki baat horahi, bablu dablu will open company outside will buy cheap solar panels there and then shahbaz govt will buy solar panel from that company. Company will be on some maqsood chaprasi name

Like Raja Riaz, RajaRaW is also exposed , this is your true face and level of ur posts.
Sometimes you try to be arastu like ahsan Iqbal by copy paste posts but when you write you look like the cheap Tarrar..
R

pkpatriot said:
Like Raja Riaz, RajaRaW is also exposed , this is your true face and level of ur posts.
Sometimes you try to be arastu like ahsan Iqbal by copy paste posts but when you write you look like the cheap Tarrar..
Click to expand...

استاد جی that contract was proven to be cheapest in Asia. I don't need to tell you how much Donkeys wasted afterwards on buying expensive LNG afterwards.