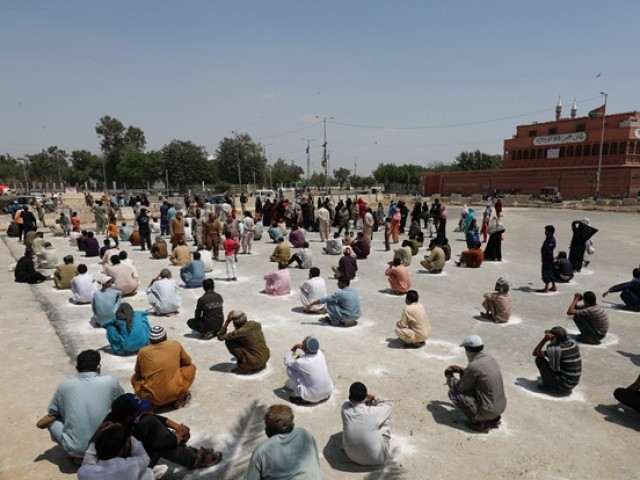 People sit on the ground in circles drawn with chalk to maintain safe distance, as they wait to receive sacks of ration handouts from a distribution point of a charity, during a partial lockdown after Pakistan shut all markets, public places and discouraged large gatherings amid an outbreak of coronavirus disease (COVID-19), in Karachi.PHOTO: REUTERS


GENEVA: The UN Conference on Trade and Development (UNCTAD) on Monday bracketed Pakistan among the countries which would be the hardest-hit by the global pandemic of coronavirus, demanding a raft of measures for their relief.

UNCTAD said in a new report that the developing countries – which according to a UN body’s tally number 170 – would need a $2.5 trillion support package this year to face the economic crisis caused by the pandemic.

Their economies will take “enormous hit” from high capital outflows, lost export earnings due to falling commodity prices and currency depreciations, with an overall impact likely worse than the 2008 crisis, the report said.

According to the report titled ‘The Covid-19 Shock to Developing Countries’, the required measures included a $1 trillion liquidity injection and a $1 trillion debt relief package, another $500 million for emergency health services and related programmes on top of capital controls.

“Sub-Saharan African countries will be among the hardest hit alongside others, including Pakistan and Argentina,” said Richard Kozul-Wright, director of globalisation and development strategies at UNCTAD, who oversaw the report.

Referring to a “frightening combination” of factors, including mounting debts, a potential deflationary spiral and a major health crisis, Kozul-Wright said that according to conservative estimates, the coronavirus would cause a $2-$3 trillion financing deficit over this year and next.

“The international institutions have to take these sorts of proposals very, very seriously as it’s the only way that we can see to prevent the damage already taking place and which will get worse,” the UNCTAD director stressed.

Leaders of the Group of 20 major economies pledged on Thursday to inject more than $5 trillion into the global economy to limit job and income losses from the coronavirus and “do whatever it takes to overcome the pandemic”.

“If G20 leaders are to stick to their commitment of ‘a global response in the spirit of solidarity,’ there must be commensurate action for the six billion people living outside the core G20 economies,” Kozul-Wright said.

The report comes as British charity Oxfam called for a package of nearly $160 billion in immediate debt cancellation and aid to fund a Global Public Health Plan and Emergency Response to help prevent millions of coronavirus deaths in poorer countries.

The charity set out a five-point plan – investment in prevention, 10 million new health workers, free healthcare, government requisition of all private facilities and availability of vaccines and treatments – to enable poor countries to take action to prevent the spread of the disease.

“We know from Oxfam’s experience of fighting Ebola that with rapid action, this disease [coronavirus] can be stalled and its catastrophic impact stopped. But we must act now and on a scale never seen before,” Jose Maria Vera, Oxfam International Interim Executive Director said in a statement.

The statement quoted a study from the Imperial College, which said that coronavirus could cause 40 million deaths in the coming year in the absence of interventions. “Without urgent, ambitious and historic action, we could easily see the biggest humanitarian crisis since World War II,” Vera warned.

According to Oxfam estimates, doubling the health spending of the 85 poorest countries, home to nearly half the world’s population, would cost $159.5 billion – less than 10% of the US fiscal stimulus to fight coronavirus.

It said all fees for health should be removed and free testing and treatment should be delivered.

“Governments must requisition all healthcare capacity in their countries and ensure that all the facilities, private and public are directed towards fighting coronavirus and meeting essential healthcare needs.

The statement emphasised that a global agreement must be reached that vaccines and treatments, when ready, would be made rapidly available to everyone, who needs it free of charge, saying that the profits of pharmaceutical corporations could not be put ahead of the future of humanity.

“It’s understandable that national leaders are focused on helping their own citizens, but G20 leaders must also find the space for supporting poor nations too. We can only beat this pandemic if we act in solidarity with every country and for every person. No one is safe until we are all safe.”

Pakistan better decleare bankruptcy and remake its economic policies... IMF is just scared Pakistan will get out of its net
M

unfortunately, all i see is devastation
You must log in or register to reply here.
Sponsored Link