Betraying the whole of Muslim Ummah

Honestly we all know there is never a united muslim ummah. We got free petrol aid that was looted here n there free bees n tons of muzdoor jobs and they always treated us like slaves not equal. Now they want long term survival and thinking that by agreeing to recognise israel feel comfy n enjoy future. But that allah knows right or wrong decision as rasoolullah n sahabaekuraam luved side by side with yahoodis no problem its all politics so u want some guranteed follow the righteous path to allah n everything will remain at ease inshallah
H

Monarchies are there only to protect their family. They have nothing to do with the people of the country.
Saudis are bound to go down. I'm not seeing them in next 10 years.
They are done and dusted.
H

I am afraid there was no Ummah to begin with. This word is just used satisfy people who live in a dream world. This headline of this video only exposes how most Muslim's still look upon the Arab's as being the torch holders for the Muslims. Fact is that most Muslim's i know despise Arab's like a plague, they are the most racist people in the world. I really don't care what happens to them or what they do. I don't care about Syria, Yemen, Iraq or Palestine at all that makes me a traitor as well. Let me tell you there are plenty of traitors to this Ummah thing amongst Pakistanis like Nawaz Sharif and Zardari who most likely have excellent relations with the Zionists. Sab se pehle Pakistan, we'll celebrate this Muslim's being like one body thing if it ever happens.
F

TRAITORS will get their DUE!

!Haider said:
Monarchies are there only to protect their family. They have nothing to do with the people of the country.
Saudis are bound to go down. I'm not seeing them in next 10 years.
They are done and dusted.
Click to expand...

ForReal said:
TRAITORS will get their DUE!
Click to expand...

!Haider said:
Monarchies are there only to protect their family. They have nothing to do with the people of the country.
Click to expand...

Imranpak said:
I am afraid there was no Ummah to begin with. This word is just used satisfy people who live in a dream world...
Click to expand...

As a young man you always remember that we are facing two options and a war between two currents. The first sees that the modern civil state is the only way to protect our souls, our stability and our progress, and there is a trend that wants to build imaginary glories and bring them back again through the mountains of Skulls and oceans of blood, so is it worth it or not, and for how long we are shedding our blood and killing our lives and the result is the same, and the one who benefits from all this is others, and all the developed countries in the Arab and Islamic world, from the Emirates, Malaysia and others are stable and safe countries, while the groups nested in countries through transnational ideologies have led to wars based on illusions, whether it is an Islamic caliphate, Mahdism, or anything else. We are up to this moment living in religious illusions that we do not know if they are true or not, where the dispute is over marginal matters, while others, such as preserving our lives and preserving the lives of our neighbors and our people, are matters of the core of our religion, and I want to say to the young people, do not be fooled behind every croak and everyone who carries a flag, in the end, slogans do not sing and do not get fat from hunger. 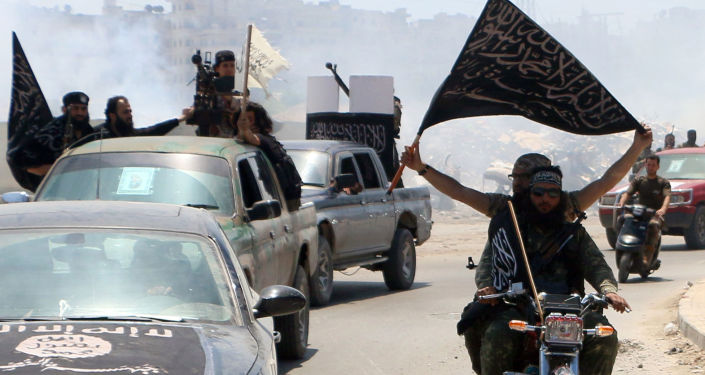