This what Imran Khan said About Modi. Someone is settling the score on Modi's behalf First, as “Mian duaani aala” because he used to bribe the peons outside the government offices with a “Two Anna Coin” Duaani as we called it, a square coin with rounded edges. Then as “Mian Uthanni” bribing junior clerks with the eight Anna coin. Then “Mian Gutter Chor” as they would buy back the “gutter covers” from the legions of young boys they paid to steal the gutters they themselves supplied to Lahore Municipality.

The above and some of the later mentioned early history of the Sharif’s is as narrated by a friend whose family and Nawaz’s were neighbours in Ram Gali. According to my friend, the Sharif family didn’t live in main Ram Gali but another even smaller Gali. As my friend puts it “oaay Yaar Ram Gali day naal aali Gali. …”. He swears that Nawaz Sharif’s grandfather was a flower garland seller in the Amritsar Heera Mundi. Absolutely nothing wrong in selling flowers to patrons visiting brothels and watching mujras, to make an honest living, I said.

He had seven sons. Three of them, brothers of Mian Sharif, Nawaz’s father, first came to Lahore after partition and worked as unskilled laborers. They then got the other brothers to join them and after a few years of hard labor and some questionable practices, Mian Sharif who was the smartest amongst them with the help of another gentlemen (name unknown) put together a small iron Bhatti (an iron smelter) to smelt iron called “Daygee loya”, loosely translated meaning “iron smelted in a container”. Common grapevine in those days was that they got most of their raw materials by stealing gutter covers and railway line tracks. Anyone who had a “hot iron” to sell, the Sharif’s would buy it. Pun intended!

During this period they also made a tubewell which they managed to install at one of Nawab Kalabagh’s farms. The Nawab liked the performance of this tube well and it also helped that Mian Sharif would literally live day in and out outside the Nawab’s farm ready to fix the tubewell in case a fault developed. In those days he traveled on a cycle. The tubewell was a fine piece of machinery and the Nawab referred him to other landlords as well as installing more of the Sharif tubewells on his own lands. Mian Sharif’s cycle now became a scooter and the money started to flow. One of course one must admire how the elder Sharif worked very hard to keep his customers happy.

He then used his connections with Nawab Kalabagh to be introduced to Lahore Municipality where he earned the “Mian Duanni” and “Mian Uthanni” monikers. Through his charm and guile and humility and bribery (Don’t blame Nawaz and Shahbaz and Maryam, Hassan and Hussain and Hamza it’s in the upbringing and the DNA) he received an order to supply gutter covers in Lahore. It was here that Mian Sharif and the brothers, now all part of the business called “Ittefaq” got this brilliant idea to employ young kids to steal the same gutter covers they had earlier supplied to Lahore Municipality. These were then resold back to the Municipality appropriately varnished and repainted. Of course many palms and hands were greased there as well. That’s how Mian Sharif acquired his third moniker of “Mian Gutter Chor”. From there it was a very similar and typical Malik Riaz type of “wheels to files” approach in getting lucrative government contracts and obliging anybody and everybody with everything and anything.

Like many business people in Pakistan I personally know today, Mian Sharif and brothers saw absolutely no conflict in displaying personal piety, beard and all, Juma prayers, giving to Masjid charities, and simultaneously, lying, cheating, stealing, bribing and dealing in all sorts of corruption to get a business contract or a deal. Corruption for these guys had nothing to do with personal values. Their God of business was very different to the Allah of the Mosque

It is therefore no surprise how frequently we hear the use of “Alhamdulillah” which Nawaz Sharif and his sons, Hassan and Hussain and daughter, Maryam, preface their dark lies with and with such a straight face that one is just stunned at their audacity and complete absence of remorse or shame. Honestly It still jars one’s senses, even though I’m no snow white, to hear and see this family use the name of the Almighty in such a manner, unafraid of the consequences either here and or in the Hereafter. The Panamagate laid bare in all its ugliness, their entire personal value system

Anyways back to the bootleggers.

Business flourished and the family now moved to Model Town. Like all kids of nouveau rich people, Nawaz in his late teens was a pampered floozy. Wanted to become an actor. Couldn’t. Then a police officer. Couldn’t. Had a very average academic record and his major job was to just accompany his dad everywhere he went and stand silently by in the background and smile and nod intelligently. Shahbaz even then was the smart guy and handled major parts of the business. But Nawaz. Most times he would drive people who Mian Sharif wanted to oblige in their Mercedes. This was to show how much these people Mian Sharif valued and hence would send his elder son as a driver.

One such person who traveled with MNS from Lahore to Raiwind and back to witness the tableeghee ijhthima at Raiwind narrated the following. “I had expressed a desire to the late Majeed Nizami of Nawai Waqt newspaper to witness the Ijhthima of the Tableeghee Jamaat, having heard so much about it. Majeed Nizami saheb picked up the phone and called Mian Sharif and told him that a few close friends of his, mentioning the narrators name, wanted to visit Raiwind. “Tomorrow morning you’ll have a car to take you gentlemen to Raiwind”, said Nizami saheb, as he put down the phone.

Next morning the house help came to inform me that someone had come to pick me up and saw this handsome young man (This is 1979 or 1980, post Bhutto period of Gen Zia). I shook hands and didn’t know who he was because all he said was “Jee Majeed Nizami saheb ki request purr may aapko Raiwind lay jaanay ayaa hoo” and that his name was Nawaz. Later when my two other compatriots joined us and asked him who he was etc, I discovered he was Mian Sharif’s son, Nawaz. He hardly said a word going or coming. Barely answered any question except in monosyllables. Jee. Nahee. Shukria. Later I wondered at the simplicity of this young man and little did I know that the future PM of Pakistan was driving us to Raiwind.

This was Mian Sharif’s approach. Oblige, bribe or buy. An approach that is the pillar of all corrupt business people the world over and which has stood the family in very good stead. Bribing, obliging, buying and finally as Chief Ministers and Prime Ministers using their position, powers and authority, to gain massive financial advantage and loot and plunder and become the billionaires they are today.

But again I digress. So finally in 1981 this person gets picked as Finance Minister of Punjab by the then Martial Law Governor, Gen. Jilani. This choice is incredibly confusing, highly intriguing and has bedevilled many since it happened. Why on earth would Gen. Jilani, an extremely bright and intelligent man, choose a simpleton like Nawaz Sharif to handle a very complex portfolio of a Finance Minister?

But this is a two part question.

To address the first is quite revealing. Nawaz was no brilliant scion of a Saigol or a Valika or a Habib or an Adamjee, highly trained in the complexities of business enterprise and finance etc. He was a person who was considered extremely simple even by his own father and hence never given any serious independent role in the family business. His primary job was to act as a glorified chauffeur to his father’s friends or friends of friends or people who the father wanted to oblige or basically a go between them.

So why him? And why the Finance portfolio?

I’ve perhaps asked this question from over a hundred people over the years. Including those who were very close to Gen. Jilani and many to the Sharif’s as well. The answer, of course unconfirmed and unsubstantiated. The reality now long and buried with at least one person involved, the late Gen. Jilani. But what one hears and or alluded to in hushed whispers is quite stunning and casts a very dark shadow on the family. I’ll stop here and don’t want to say anything further.

But now that the choice had been made, Mian Sharif requested the Finance portfolio to use this to increase the family fortunes through lucrative government contracts. This they did from the moment Nawaz stepped into his first political office and which he and his family have continued to do to this day.

Let’s not forget that Nawaz Sharif became Finance Minister of Punjab in 1980 and had an uninterrupted run of 13 years in political office.

And after 35 years in power, look at the state of education, health care, law and order, governance, , corruption in Pakistan and look at this man’s personal wealth.

Thanks to Imran Khan, the Supreme Court and the Panamagate JIT, we now have a glimpse into the massive corruption and loot and plunder by this man. If I were a Frenchman storming the Bastille and if anyone deserves the guillotine, real or political it’s this guy, his brother Shahbaz, his daughter Maryam, sons Hassan and Hussain and brother in law, Ishaq Dar, for what they’ve done to Pakistan. And all others, military and civilians, who have brought us to this state

And yet there are still some who speak for him and his odious family and want the criminal mafia back in power! Hopefully never ever again will we allow these criminals back in power! 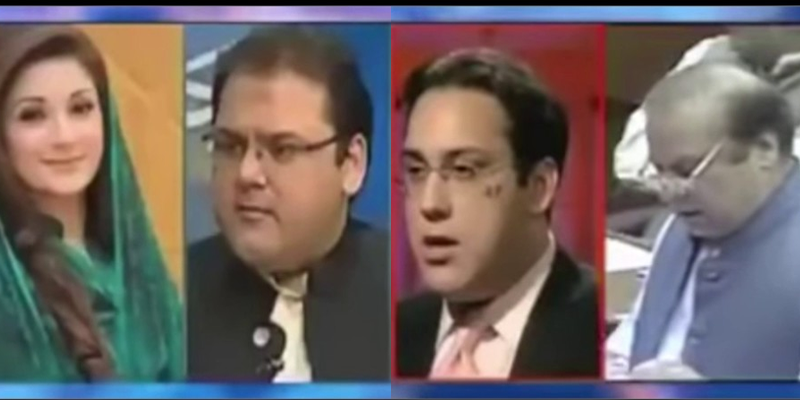 First, as “Mian duaani aala” because he used to bribe the peons outside the government offices with a “Two Anna Coin” Duaani as we called it, a square...