Isnt it Hypocrisy of Jamat Islami?? Protest against In-justice is wrong; JI

Good Morning: So Today Sit-in against injustice are wrong :13: 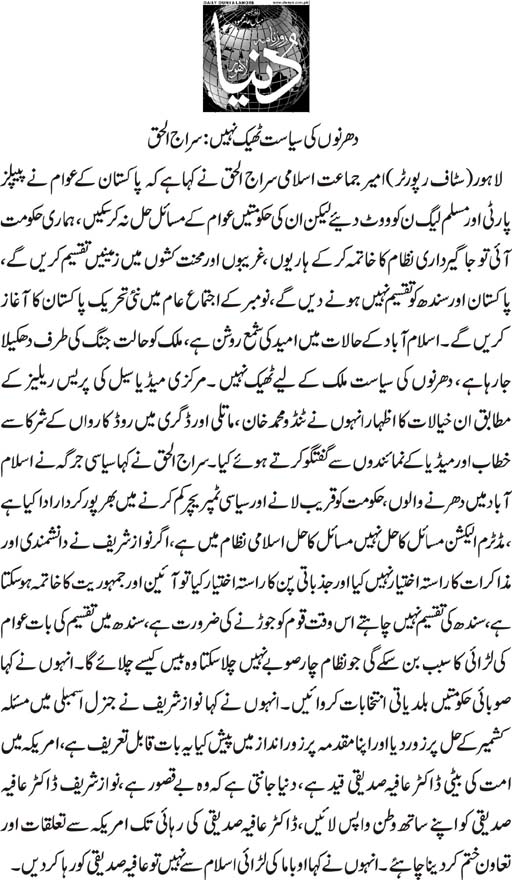 And just few days ago

This JI is desperately trying to stay a float,they know they are on a sinking ship.

JI is playing politics to survive in KPK.
R

Pakistani to the core

Sometimes it surprises me how blind-folded our youth has become with Imran Khan's unnecessary tall claims.

a. First of all, the fanatics of Khan, should stop paying their utility bills, and have their electricity connections disconnected, so that they don't have to waste time in cursing others and supporting Khan online. Without electricity, they can't access internet, or charge their phones.

b. JI said that these are reactions to the Govt.'s injustices. And JI has warned Govt. not once but several times to pay heed to the public requirements. However, they are also suggesting to PTI and PAT that prolonging their sit-ins is futile, and is not in the favor of Pakistan.

c. Right now, it is true, that given the circumstances, the sit-ins are mere festivals and are not bringing about any change. PTI has strong power in the parliament, they should bring about changes using their power in KPK Govt. instead of staging sit-ins like PAT which has no representation in the Govt.

d. On the front, PTI announces resignations, but from the backdoor channels, SMQ and IK keep requesting JI to pressure the Govt. NOT to accept resignations of the 30 out of 33 NA members.

e. With IK having thrown out PTI's president (while the fans are happy calling him traitor), and then yesterday throwing out 3 serving MNAs from PTI for non-compliance to the party leadership's forced resignation order, PTI is constantly carrying out self-immolation.

f. Yes change is required in Pakistan, yes IK may be the messiah that all his fans were waiting for, but that does not mean that Pakistan should be harmed if IK is not given everything he demands.


After Alice, we've got Imran Khan in Wonderland; his political party is fast turning into a bunch of hot-headed rebels, who at best can sing, dance or chant slogans to bring about a change, which they themselves are unclear of.

What is the long-term vision of PTI? What has PTI attained in one year of its governance in KPK? Would PTI have transformed KPK into a model province if it had continued working harder on constructionist policies instead of obstructionist, destructive and short-cut policies? These are questions that PTI fans need to ask themselves and their leader.

Please, I would like to remind all PTI fans yet again, that we should stand for Islam and Pakistan, and while following a one-man-show standing up for Pakistan, we should always bear in mind that one man is not greater or larger than Pakistan; and that if die-hard support for one man is causing harm to national interest, we need to find out where the flaws lie.... and frankly speaking, blaming everything and anything on the Government isn't really the way of wise people. Pakistanis don't need a messiah to change their destiny, they need to change themselves and mend their own ways through which they too have caused harmed to Pakistan.

Unless it is done by JI , everything is wrong
M