Nawaz and zardari kanjars never had guts to say that
M

Good..but why we do we continue to seek american help again n again..when we know they favor india always..and are not sincere to pakistan interests. We always refer to them aa foriegn power trying to take away our nukes..yet we always seek their support and help. Explain that.
P

Spoken like a true LEADER of Pakistan. 40 years of retarded rule of NAWAZ TRAITOR Bawaseer is becoming a distant memory.


Now the Jew CONTROLLED Dajjal Washington and its insane ruler. The Empire of deceit and lies.

Bolton’s ouster is only part of a PR gimmick by Trump for re-election ambitions.

Bolton was working for Netanyahu the Jewish Hitler of occupied Palestine.

Bolton emboldened Israel considerably and his firing may in part have been to send a message to Netanyahu.

The 911 inside job FRAUD by deep state.

The “Dancing Israelis” who turned out to be Israeli Mossad agents caught filming and celebrating the destruction of the twin towers.

Arrested by police and released without investigation, they were not mentioned in the 911 Commission Report.

Later on Israeli TV they said they were sent to New York to film the destruction of the twin towers. Allegedly, there was no advance warning of the event, but obviously the Israelis knew.


The alleged fundamentalist orthodox fanatical Muslims who were prepared to die to be martyrs, but who drank, drugged, and lived with strippers and prostitutes in Florida.


They were the patsies paraded through flight schools and left a highly visible public record.

They all flunked out and could not even fly small planes, but performed miraculous flight feats in their attacks on the WTC towers and Pentagon that military and civilian airline pilots say are beyond their own skills.


These Saudi Arabians were being operated by US or Israeli intelligence to create a record to serve as a parallel patsy operation that could be used to cover up the false flag attack.


Numerous video cameras recorded whatever exploded at the Pentagon, but the FBI has refused to release them for 18 years. Clearly, the videos do not support the official story.


About half of the alleged hijackers have been found alive and well and deny that they had ever left their countries.


In 2001 no cell phone calls were possible from aircraft at the altitudes from which calls were reported.


The airliners that allegedly hit the twin towers were flimsly compared to the steel and concrete of the towers.

The airliners would have smashed against the structure and fallen to the street below.
Pre-knowledge of 9/11 was widespread.

The stocks of the two allegedly hijacked airlines were sold short prior to the event, resulting in large profits when the stocks fell in response to the hijackings.

The short-sellers were swept under the carpet and not investigated.


FBI director Robert Mueller was instrumental in covering up for the false official story of 9/11, a story that has zero evidence in its behalf.


If a handful of young men with no intelligence service or government support can defeat the entire national security state of the United States and all of its NATO and Israeli allies and successfully attack with devastating results both New York and the Pentagon itself—the very symbol of American military supremacy—the Soviet Union could have wiped out the US and all of Europe without detection.

Don’t you wonder how we survived the Soviet Union when the “Great American Superpower” was so easily defeated by a handful of young Saudi Arabians?


Four hijacked airliners are alleged hijacked, all at airports served by an Israeli security company. All four airliners allegedly crash.

Two into the WTC towers, one into a field in Pennsylvania, and one into the Pentagon. Yet no airliner debris exists. The Pentagon’s lawn is not even scratched.


The President of the United States refuses to testify before the 9/11 Commission unless he is accompanied by his handler, Vice President Cheney. Both refuse to testify under oath.

The 9/11 Commission is oh-so-respectful to the distinguished president and vice president.


One member of the 9/11 Commission, a US Senator, resigned from the Commission, saying that “the fix is in.”


And not a peep from the controlled pressitute media whose only function is to deliver the controled explanations that the ruling oligarchs want planted into Americans’ minds.


Tennants of the WTC buildings reported constant noises, floors sealed off, service disruptions and that the excuse was the installation of fiber optic cable.


If the buildings faced condemnation as reported because of asbestos fireproofing, who would go to the expense of installing fiber optic cable to upgrade the Internet capability of condemned buildings?


Scientists have found reacted and unreacted nano-thermite and other elements used in controlled demolition.


They have proved the existence of these elements. They have samples from the WTC dust left which they have offered to scientists and governments for testing in order to prove or disprove their own findings.

No takers.
Instead, we have the appearance of nonsensical claims that the WTC buildings were brought down by a directed energy weapon and by nuclear bombs. These are preposterous allegations, the purpose of which is the deliberate creation of disinformation in order to focus attention away from the false official story and bury it in disagreements about what caused the buildings to fail.


I have checked with weapons specialists who are critics of US government foreign policy and who monitor every development in weapon systems in the US and Russia.

This is what they tell me: “I can confidently state that no direct energy weapon, capable of demolishing such a structure at the Twin Towers, existed in 2001, nor does it exist today.”


Another reported that there are lab tests of directed energy in Russia but no deployed weapon.

He suggested that people who believe in this fantasy story should explain the safe source of high energy that the alleged weapon used, and how it was moved on site and removed without detection. Moreover, a directed energy burst would show on detectors which monitor the electromagnetic spectrum.

No such evidence exists. Since no such weapon has ever been tested to bring down skyscrapers, why would the government take the risk of using such a weapon for the first time in a public scenario where who knows what could go wrong and explanations would have to be given?

And why reveal to foreign powers the existence of such a weapon? Controlled demolition is an old and familiar technology that works. And it did.

I could go on and on.
As I wrote in a previous column, when Americans fell for the 9/11 deception, they lost their country, and peoples in seven countries lost their lives, limbs, and families.

The further escalation between nuclear-armed rivals India and Pakistan may lead to “unimaginable” fallout so the world must intervene to help avoiding that, Pakistani Prime Minister Imran Khan told RT in an exclusive interview.

The “explosive” situation in Kashmir could escalate “way beyond” the Indian subcontinent, Khan told RT’s Paula Slier. He reminded that it would be “the first time [when] two nuclear-armed countries come face to face after the Cuban crisis” of 1962.

No rational human being can talk of a nuclear war.
Click to expand...

The Indo-Pakistani standoff took a turn for the worse after New Delhi revoked the decades old autonomy of the part of disputed Kashmir it controls. Khan urged the world community to help preventing the conflict from spiraling into “a nuclear hotspot” with “unimaginable” consequences. 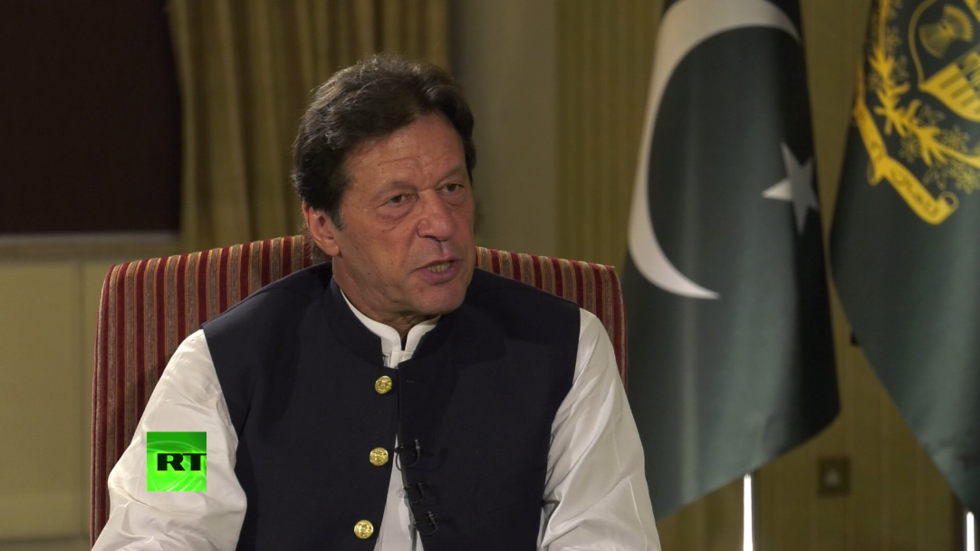 The further escalation between nuclear-armed rivals India and Pakistan may lead to “unimaginable” fallout so the world must intervene to help avoiding that, Pakistani Prime Minister Imran Khan told RT in an exclusive interview.

www.rt.com
You must log in or register to reply here.
Sponsored Link