Senior players are mocked in Pakistan and sometimes i wish to leave the country :- Younis Khan dishe

Well , leave the country if you want
do not think that you are anchor of this country or team

as long as you get praises you are happy and when you are crap you still expect praises ....

every tom **** and harry says I will leave country , go on who is stopping u

You need to know flattering to get the desired results
H

Seniority doesn't mean anything, this is what hurting Pakistan no performance no place period. In recent past what has he done every series one century and than rest of the series zero performance. He should side line himself respectively and play club cricket.

ODI BATTING AND FIELDING IN EACH SEASON BY YOUNIS KHAN

'Hurt' Younis challenges PCB to build team without him

'Hurt' Younis challenges PCB to build team without him

​
Younis Khan, the Pakistan batsman, has lashed out at the PCB and selectors for dropping him for the one-day series against Australia and saying he also "out of contention" for the World Cup. He challenged the selectors to build a team without him in the mix and said he will remain sidelined until the 2015 World Cup but will not retire.

"Don't select me, not even in Tests. I sacrifice my future," Younis, 36, said on the sidelines of the ongoing domestic T20 tournament in Karachi. "I am saying a simple thing, if they are saying that youngsters are future of ODIs, then where is the future of Pakistan in Test cricket? Don't select me in Test matches and make [the youngsters] the future of Pakistan in Test cricket too. But what will happen if they can't make a team for ODIs and Test matches after five months, will they again do recalling?

"I won't die and I won't be 70-year-old in four-five months, if they don't let me play with dignity then so be it. They have hurt me, they have hurt me when they said that players like me have no future. Then who has a future? So a player like me should shoot himself? When they are 35, 36, players like me wake up at seven 'o' clock, show commitment, I can do only this. Instead shoot ourselves, don't play cricket at all, don't play domestic cricket at all? I will wait for 4-5 months. They are saying that I don't have a future, I will wait, I am not retiring, I will wait, may this team go ahead, if they make the team [strong] I won't come back."

The strange affair of the Indian gentleman 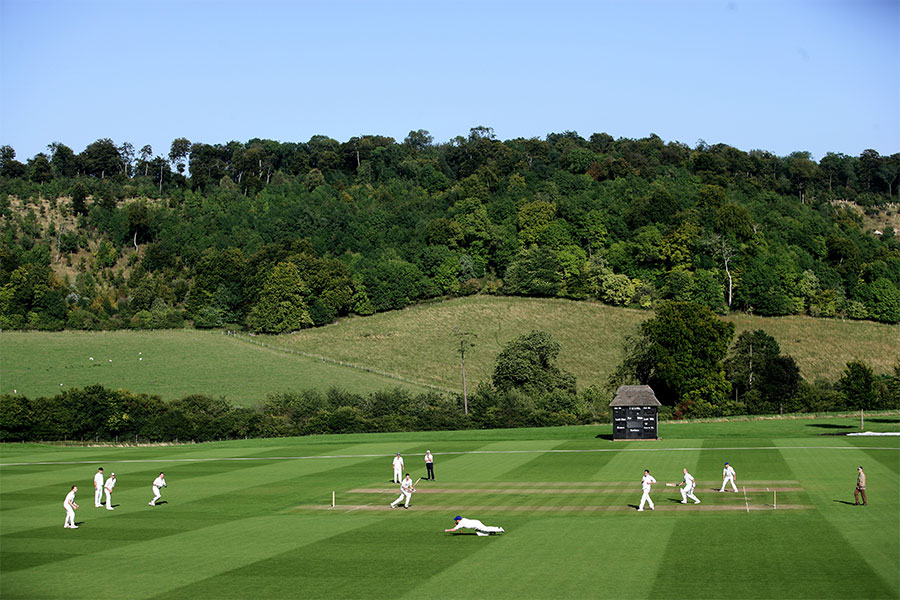 Will you travel 5000 miles just to play a game in this setting? Getty Images


Any cricket club with an online presence will have had their fair share of them - the emails from overseas players looking for games (and money, accommodation and possibly even work). Most come from Indian or Sri Lankan players. I've had others from Aussies and the occasional Pakistani player too.
For some reason, they all seem to be prodigious batting allrounders who can swing the ball at medium fast pace and also keep wicket when the need arises.
And they all, from me anyway, get the same treatment - a polite reply thanking them for their enquiry which I must regrettably turn down because a) We're skint and b) We're really, really not good enough for you.
This is not false modesty on our part. Our team, the Old Contemptibles, really is rubbish. We revel in it and are defined by it. A stellar season, for us, involves two victories in 12 matches.
We have no ECB accreditation, ground or money. And we have even less talent.
In the kingdom of the blind, we are deaf and dumb as well. We are the big-boned boy who's always picked last because all he can offer the team is asthma. We are the runt of the litter, the virtually fat-free milk de la crme.
We play the game for the love of it. And for the love of mocking each other while we do it. No more, no less. Well, actually quite a lot less if truth be told - we once followed-on in a one innings game.
That's how bad we are.
A couple of years ago, I received the following email:

Dear Mr Wardale,​
I came across your quirky Old Contemptibles cricket club website on the Talentcricket page and wish to introduce myself as one of your ilk, an old boy at 44 still keen enough to play regular cricket in Kolkata, India. I have played representative cricket for the state of Andhra Pradesh in my younger days.​
If you would be kind enough to find an overseas player space for a middle-order dasher and a swing bowler, reasonably good fielder (I don't let many slip thru my legs), I would like to turn out for a few games in June/July 2013 at your club.​
The basic idea is to spend a few weeks in the Blighty and take in the atmosphere of a lovely English afternoon of cricket followed by a few beers after sunset. Or on a bad day, even earlier. when my Kookaburra fails and the ball gets carted all over.​
Looking forward to hearing from you.​
Cheers​
Naveen Sarawagi​
My reply:

Dear Naveen,​
Thank you for your inquiry - you certainly sound like an honorary Old Contemptible in the making.​
Alas, our lack of cricketing talent is matched by our lack of financial clout. We are a humble club with precious few funds and, as a result, cannot afford to take on overseas cricketers even if we wanted to.​
If, however, you ever do make it over here, please feel free to email me again. We'd love to have you visit us for a game one Sunday and the subsequent 'few beers'.​
Best of luck with your search for a club and may your Kookaburra smash all-comers to all corners of all grounds.​
David​
That was the end of that, I thought.
I was wrong.

Dear Mr David Wardale,​
Many thanks for your prompt response.​
I am not looking to be sponsored by your club. I am a successful international businessman and also have interests in England in the shipping industry.​
In fact I would be happy to host an evening's drinks for all the old boys there.​
So if you might still like the idea let me know, of course I shall be in touch and see how this develops.​
Regards​
Naveen​
And so it did develop. We became Facebook friends and swapped occasional tittle-tattle about sport in general and, of course, cricket in particular.
My fellow club members were, like me, very keen for Our Indian Gentleman to turn out for us but, like me, rather sceptical that it would ever happen.
Two years passed. No Naveen. He would comment on the odd match report sent out to our 40-plus mailing list members, he'd post photos on Facebook of his trips around India and beyond. But he didn't get any closer to England and a game with us.
Until, suddenly, it all fell into place. An email asked me for our upcoming fixtures. A reply informed me that he would be in Europe on a cruise in early September. Another one announced flight details into Heathrow and train times up to our base in Loughborough.
I mentioned before that I was sceptical. At times, I'd wondered whether the whole thing was an elaborate wind-up by some particularly mischievous club member (and I can think of a few of them). It had become the stuff of legend; amusing, wry and almost certainly mythical.
But on Sunday, September 7, 2014, the myth turned up in Loughborough - a dapper, slightly portly, whites-clad middle-aged Indian gentleman who we welcomed into the sweaty folds of our club.
Naveen Sarawagi had travelled some 5,000 miles to turn out for the most occasional and wildly non-competitive cricket team you could imagine.
Only one question needed asking: Why?
Over to the man himself:
"I have always been into cricket. Sunil Gavaskar was my childhood hero. I started playing when I was three and represented my school, college and university teams and played junior state level cricket between 18 and 20 years of age.
"After 25 there was a hiatus as marriage and work held sway but a couple of years ago the bug to play bit me again as I regained good physical fitness levels.
"I played a few casual games for a local Kolkata side but I was always fascinated by the idea of playing in the Blighty and went on the net seeking suitable clubs that would allow me.
"A few nondescript replies ensued before a certain Mr David Wardale - may his tribe increase - responded positively and offered me a foreigner slot on the Old Contemptibles team."
So it was really as simple as that - answer positively and politely and... strange things might happen.
But how did Naveen perform in 'The Blighty'?
Our opponents on the day were Madingley - a Cambridgeshire team who we traditionally travel down to traditionally get destroyed by at the traditional end of both our seasons.
For once, Madingley came up to play us. It was a glorious September day. Dare I say it, an Indian Summer day. Our rivals were amused and bemused by the presence of our overseas player and treated him with the utmost respect by taking his four overs of offspin for 26 wicketless runs.
Coming in at four, Naveen then chipped the second ball he faced over cover for two and was comprehensively bowled the very next delivery.
Five thousand miles for that? Oh dear, oh dear.
But all was not lost. Long ago, we declared the idea of remaining upright for 40 overs straight an inhuman and preposterous conceit. So we devised the 20/20/20/20 format - two innings each providing everyone with the chance to bat and bowl (if they so desired) and seek redemption second time around when the inevitable first innings debacle ensued.
And what a second innings Naveen enjoyed. Okay, so his last two overs went for a few too many runs (it would be wrong of me to detail exactly how many, so there will be no mention of the number 28), but his second over was, well, beautiful.
To be precise, his second over was a triple-wicket maiden. All of his victims were clean bowled and the jig of delight Naveen performed after the third wicket would have melted the iciest of hearts.
That over, by the way, is a club record.
And with the bat, Naveen hit 22, including a textbook cover drive that threatened to decapitate a large stuffed Tigger on the boundary edge (don't ask) and two beautifully-timed fours.
After the match, we retired to a local pub for the subsequent 'few beers', ensuring that Naveen's gentle stroll back to the hotel had to be replaced by a taxi ride for aching, lagered-up limbs.
So was it really worth travelling all that way for a few hours with the lowest of the cricketing low?