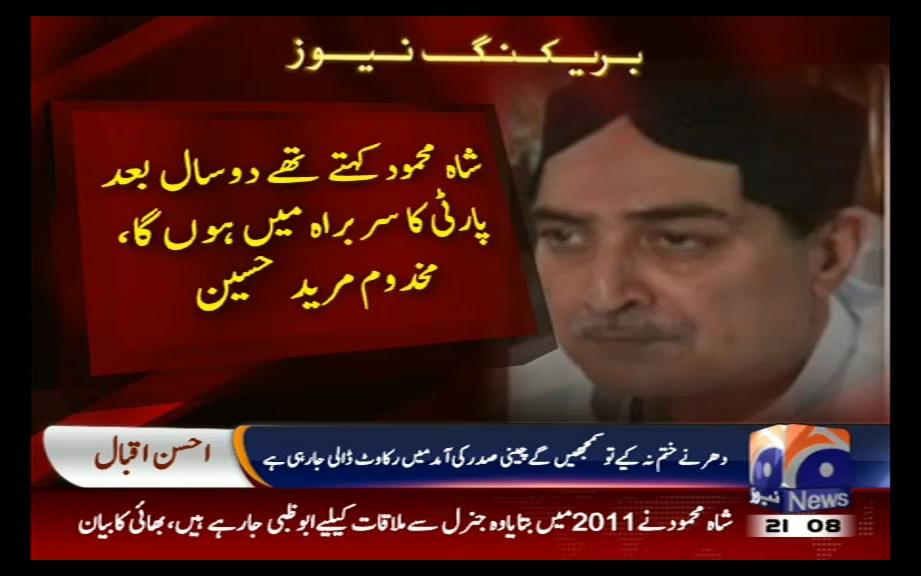 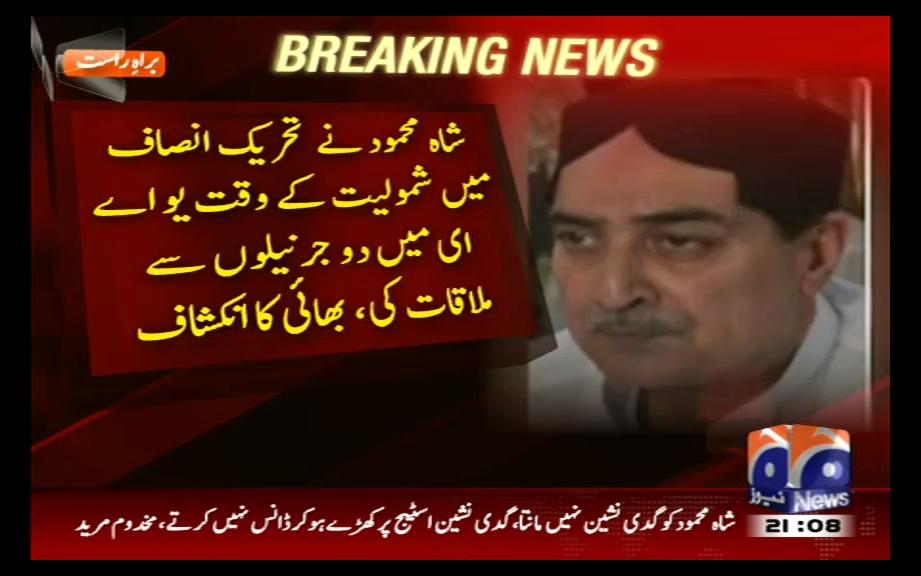 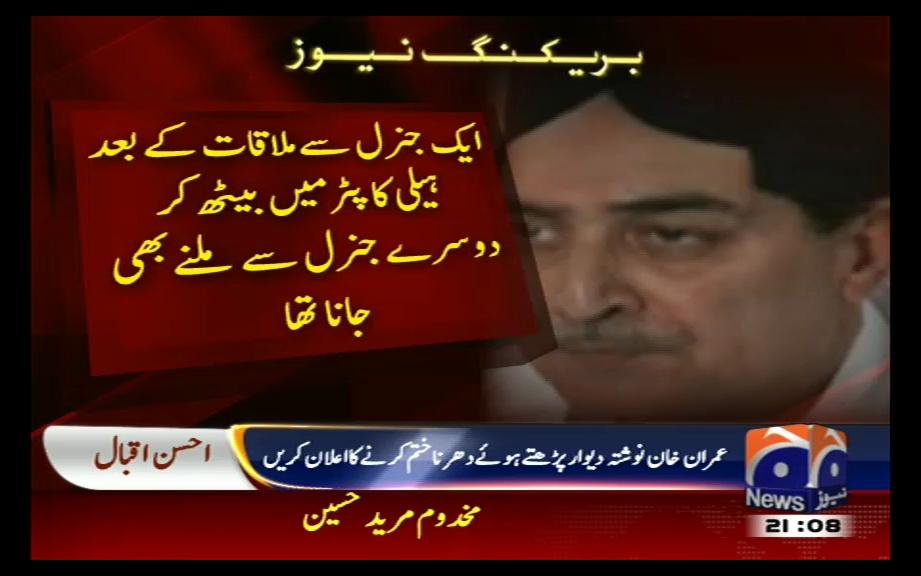 Kon na mar jayee teri saadgi per Qaladri. Is Geo credible? what about NRO can you justify?

1st its geo news and then its a special season of rumours and allegations so lot of people are saying lot of things about others with proofs.

Question for Qalandri : Would you believe stuff thats often said on TV about PPP and Zardari .Most notably that Bilawal is gay ? If so, would you like to see him go face trial in Pakistan since Homosexuality is sin and their is punishment ?
M

Well Geo may not be but what about SMQ's brother ?

chacha jani said:
Kon na mar jayee teri saadgi per Qaladri. Is Geo credible? what about NRO can you justify?
Click to expand...

Why should we trust GEW tv? 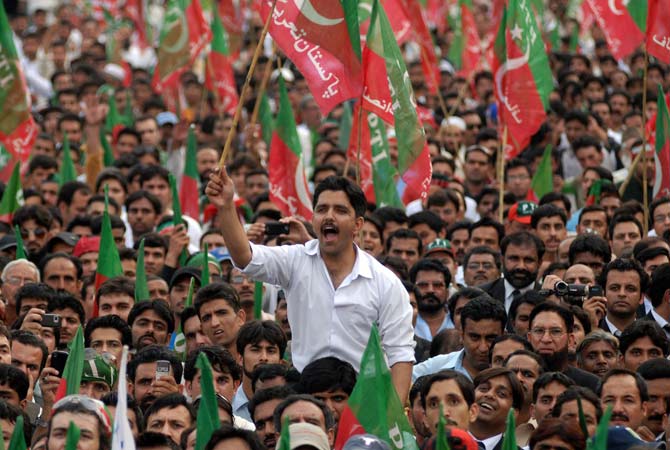 Supporters of PTI chief Imran Khan shout slogans during a rally, May 6, 2012. — Photo by AFP/File LAHORE, July 8: The Pakistan Tehrik-i-Insaaf suffered a setback on Sunday when Makhdoom Mureed Hussain, brother of its senior leader and vice-chairman Shah Mahmood Qureshi, joined the People’s Party, because of reported differences with his brother and the party leadership.
Mureed Qureshi had contested the last election from PPP’s platform, like his brother.
He contested for the Punjab Assembly’s PP-219 seat (Khanewal) in a 2008 by-poll, but lost to independent candidate Karam Dad Wahla. The seat was vacated by Shah Mahmood Qureshi who had retained his National Assembly seat.
He followed his brother into the PTI in November last year.
According to a PTI insider, the party leadership had given him no assurance that he would get the ticket for PP-219 in the next election.

“Taking advantage of differences between the two brothers, PPP’s leaders managed to bring him back to their party,” he said, adding that former prime minister Yousuf Raza Gilani had assured him that he would get the PPP ticket for the constituency.
On Sunday, Mureed Qureshi joined Mr Gilani’s procession in Khanewal along with his supporters. “Makhdoom sahib will announce his joining the party at a public meeting in Rawan (Multan),” his aide Asif Nawaz said.
Talking to Dawn, Shah Mahmood Qureshi said: “I have no differences with my brother. He takes his own decisions. It is his democratic right to join any party.”
Criticising the PPP leadership, the former foreign minister said: “A man sitting in Islamabad is obsessed with me and he wants to make life difficult for me.”
He said the PTI was determined to fight the old feudal system.
About reports of rifts in the PTI, he said: “There has been no rift, only difference of opinion. Everyone in the party has a right to differ. Besides, government agencies are waging propaganda in this regard.”
Replying to a question, the PTI leader said he had spoken to former NA speaker Amir Hussain who had told him that he was not quitting the party.
A PPP leader from Multan said Mr Gilani had been quite active in the election campaign of his son Abdul Qadir who is contesting for the NA-151 seat.
“After PML-N’s candidate Ishaq Bucha joined the PPP and withdrew in favour of Gilani junior, winning over Mureed Hussain Qureshi is another big boost for the PPP and the Gilani family.
Now, with the smart politics of Gilani, either Shah Mahmood or his son will have to contest against a member of his own family (Mureed) in the next election,” the PPP leader said. Mr Gilani’s younger son Ali Musa has already won Shah Mahmood’s National Assembly seat, NA-148.

mast qalandar tum tou badshah aadmi ho, but you are also a foolish person, you are providing a clip from Geo.
Geo!!

You should know Geo has lost all credibility in the country. Geo has nothing better to do these days. Even noora couldn't resist yesterday on the assembly floor and utterred the word Geo to Ch. Nisar to ask apology while there was no harm done to Geo at all.

No trust on his bro, what's niazi doing these nooras can buy anything with money, only thing they cannot your zameer if awaken.

wahreh said:
Well Geo may not be but what about SMQ's brother ?
Click to expand...

hahahaa,,,,He is jealous. Shah Mehmood's Younger brother is jealous from him. If someone is from Multan and knows Qureshi family, he knows better about them.
Shah Mehmood Qureshi is very generous person. This person is a Big liar.