A doctor has claimed that coronavirus has weakened from being like a "tiger" to a "wild cat" and may even peter out without a vaccine.

The bug is becoming less deadly as it spreads, according to Professor Matteo Bassetti, head of an infectious diseases clinic at Italy's Policlinico San Martino hospital.

He told the Sunday Telegraph that he has recently seen elderly patients recovering who would have died earlier on in the pandemic.

"Even patients aged 80 or 90 are now sitting up in bed and breathing without help. The same patients would have died in two or three days before," Professor Bassetti said. "It was like an aggressive tiger in March and April but now it’s like a wild cat."

The doctor says that at the height of Italy's Covid-19 pandemic in March and early April, patients frequently presented with an illness which was "very difficult to manage".

The sickest people often needed oxygen and ventilation, and some went on to develop pneumonia.

However, he says that in the past four weeks the picture has "completely changed".

This could be due to the virus mutating into a weaker form as it sweeps across the world. 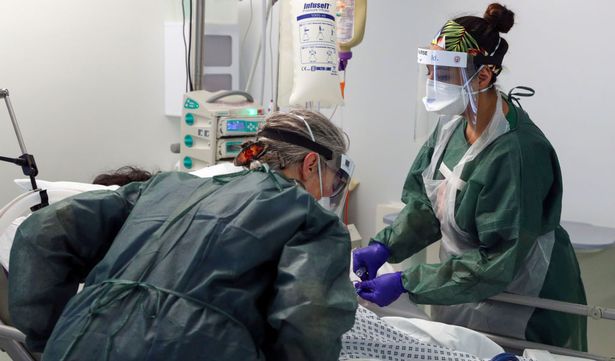 Another theory is that social distancing measures and use of PPE such as face masks mean that people are being exposed to lower viral loads, and therefore becoming less ill.

This could even mean that the bug dies out before a vaccine is available, according to Prof Bassetti.

"Probably it could go away completely without a vaccine. We have fewer and fewer people infected and it could end up with the virus dying out," he added.

Health Secretary Matt Hancock has said work is under way to "stockpile" Covid-19 jabs so they're available straight away if a vaccine is approved.

On Thursday, he told the Downing Street briefing that drug company AstraZeneca has already started manufacturing a jab being produced by scientists at Oxford University.

Mr Hancock said: "They're starting manufacture now, even ahead of approval, so we can build up a stockpile and be ready should it be clinically approved."

A separate vaccine being produced at Imperial College in London is also at the first stage of clinical trials, he said.

People over the age of 50, frontline workers and people with heart and kidney conditions will be prioritised if and when a vaccine is available. Its a great news if true.