islamabadi said:
Economics 101.......the first rule of economics is....you cant increase tax revenue in an environment of fear and recession. It has NEVER HAPPENED in the history of mankind and WILL NOT happen in this govenrment of PTI Jokers.

You have to undo the damage your government has done....you have to bring back the rate of rupee to 120 per dollar....bring back interest rate at 5.75% otherwise gaalian khatey raho for the next 4 years and tayaar raho tumhe jootey maar k government se nikaalenge
Click to expand...

So basically the media gives a lot of spin to the news. It's maybe just a part of it so I do not believe in media. ANyways if Khan wants to change let him change so far he is successful patwari will complain about the economy that their father destroyed after few months they will not have that excuse.
N


PM said he is working with SZ to fix the system..

Capital one, 24, GEO, Express, Dawn...yay sab Sharif/Zarfari mafia ki loot kay partner hain..This is why all the propaganda...
I

he should go, he only has created confusion and mistrust
I

no harm in replacing him, he has failed so far, mistrust and confusion only
N

Capital TV belongs to Ahmad Riaz Sheikh named person (not Malik Riaz) who is a close Friend of Zardari. And is Father in Law of Sharmila Farooqui.

And the rest are known for anti army and anti Pakistan policies so are friends of Nawaz and Zardari.
R 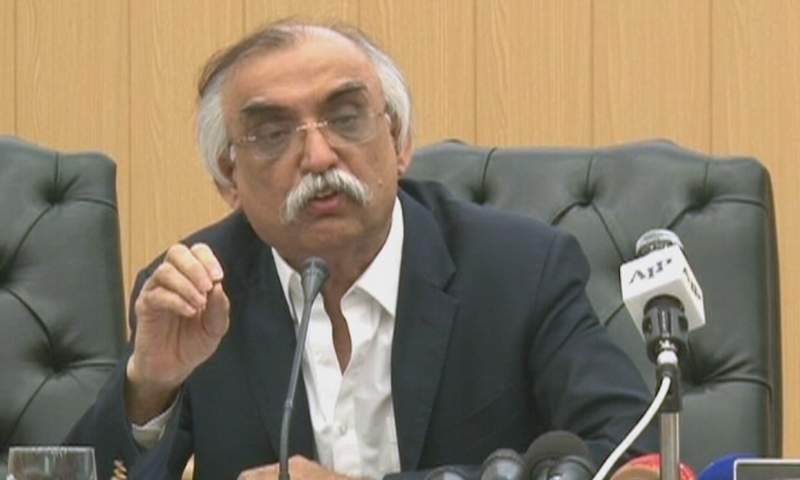 ISLAMABAD: Clouds of uncertainty gathered around the Federal Board of Revenue (FBR) as talk continues to swirl in the capital that its chairman, Shabbar Zaidi, could be replaced in the coming days.

Zaidi himself could be moved up the heirarchy, either to the position of Minister of State for Revenue that fell vacant after its former occupant, Hammad Azhar, was elevated to full minister status and given the Economic Affairs Division, or to the position of Special Advisor to the Prime Minister on Revenue.

When contacted, the chairman was tight lipped but when asked again he said, “I don’t want to comment, Prime Minister Imran Khan will decide.” Zaidi was appointed to the position on May 10 by the premier.

Another source close to the prime minister tells Dawn that two new inductions are being considered into the federal cabinet. He did not name these two, but there are indications that one of them would be Zaidi.

“No decision has yet been taken,” the source said, adding that the prime minister makes last minute changes therefore it will be premature to disclose names.

Prime Minister Imran Khan has again postponed the proposed meeting with the members of the FBR scheduled for July 17 apparently on the plea that PM is engaged with some other important issues. The last meeting postponed was meant to be held on July 10.

Members of FBR who report directly to the chairman tell Dawn that a certain amount of disconnect exists between them and Zaidi. One of them said that the chairman shares no information with the members posted at the tax body. “There is an environment of distrust of FBR chief with his team members,” the source said.

Asked for the reshuffling of top officers of the tax machinery, Zaidi said “we are making long-term planning and will not transfer any one on ad-hoc basis.” However, he said all tax officers will have to work as per their schedule until things are finalised.

The business community has been agitating against the revenue measures announced in the budget. Meetings between the chairman and delegations from the trader community broke down into pandemonium on at least two occasions, videos of which were circulated on social media. One of these events was in Karachi, and the other in Sialkot. They are also reported to have approached top people in the power corridor over the appointment of Zaidi as chairman FBR.

It is not known whether this growing anger in the business community with Zaidi’s appointment is a direct cause of the prime minister considering his replacement or not. Until appointment as chairman, Zaidi was a legal aid of big business houses in the country over tax matters with the FBR.

Another source in the Cabinet Division tells Dawn that the government is searching for a candidate to be appointed as chairman FBR. The source said that government may consider Jahanzeb Khan again as chairman following elevation of Zaidi as special assistant.

According to them, the government has earlier offered a slot of secretary Economic Affairs Division and then cabinet to Jahanzeb. However, he declined both the offers. He is still awaiting posting as federal secretary.

Another potential candidate is Younus Dagha who was removed as secretary finance recently. These two are from the non-tax group, the source said.

The reshuffling of the tax officers at FBR and field formation is linked with the final decision of whether Zaidi will continue as chairman or will be elevated to special assistant, the source said.