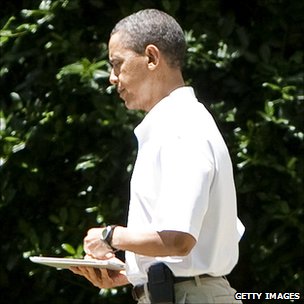 Apple now has more cash to spend than the United States government.
Latest figures from the US Treasury Department show that the country has an operating cash balance of $73.7bn (45.3bn).
Apple's most recent financial results put its reserves at $76.4bn.
The US House of Representatives is due to vote on a bill to raise the country's debt ceiling, allowing it to borrow more money to cover spending commitments.
If it fails to extend the current limit of $14.3 trillion dollars, the federal government could find itself struggling to make payments, and risks the loss of its AAA credit rating.
The United States is currently spending around $200bn more than it collects in revenue every month.
Apple, on the other hand, is making money hand over fist, according to its financial results.
In the three months ending 25 June, net income was 125% higher than a year earlier at $7.31bn.
Spending spree With more than $75bn either sitting in the bank or in easily accessible assets, there has been enormous speculation about what the company will do with the money.
"Apple keeps its cards close to its chest," said Daniel Ashdown, an analyst at Juniper Research.
Industry watchers believe that it is building up a war chest to be used for strategic acquisitions of other businesses, and to secure technology patents.
Bookstore Barnes and Noble and the online movie site Netflix have both been tipped as possible targets, said Mr Ashdown.
The company may also have its eye on smaller firms that develop systems Apple might want to add to its devices, such as voice recognition.
Apple dipped into some of its reserves recently when it teamed-up with Microsoft to buy a batch of patents from defunct Canadian firm Nortel.
http://www.bbc.co.uk/news/technology-14340470
Advertisement

02.08 is an important day. Lets see what happened. I have sold my dollars.
L

Right they got only paper money in reserves not the real wealth.