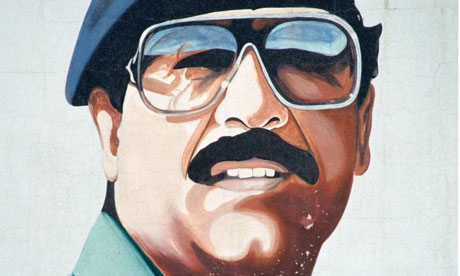 In their time, America's secret agencies have tried some outlandish schemes to attack their country's enemies, including, most famously, an attempt to do away with Cuba's Fidel Castro by using an exploding cigar.

But in a scenario more the preserve of careless Hollywood starlets such as Paris Hilton and Kim Kardashian, the CIA appears to have plotted to undermine Saddam Hussein with a gay sex tape.

According to the Washington Post's security blog, some of America's spooks believed that shooting a fake video of Saddam cavorting with a teenage boy might destabilise his regime in the runup to the US-led invasion in 2003.[HI] "It would look like it was taken by a hidden camera. Very grainy, like it was a secret videotaping of a sex session," the Washington Post quoted one former CIA official as saying.[/HI]

[HI]Nor was the Saddam sex tape the only idea floating around the more bizarre corners of the CIA's Iraq Operations Group. Other ploys involved interrupting Iraqi television with a false newsflash that would announce Saddam was handing over power to his hated and feared son Uday. The presumed idea was to shock the Iraqi people into rising up against their leaders and thus make the invasion a lot easier.[/HI]

Perhaps thankfully, the tape and fake news broadcast were never made and the Post reported that top CIA brass repeatedly rejected the ideas.

[HI]But that did not stop a CIA video being shot of a fake Osama bin Laden sitting around a camp fire, drinking booze and boasting of his own gay conquests.[/HI]

The video apparently used some of the CIA's "darker skinned" employees as extras playing the terror chief's henchmen. It does not seem to have been released.

The Post said an anonymous US official had declined to confirm or deny the accounts. "If these ideas were ever floated by anyone at any time, they clearly didn't go anywhere," the official said.

Such tactics are hardly the first time the US agencies have stretched their imaginations. A book entitled 638 Ways to Kill Castro detailed the many ways the Cuban leader had been targeted over the decades.

One of the lesser known was a plan to dispatch Castro by exploiting his fascination for scuba-diving. A batch of colourful molluscs would be rigged with explosives in the hope that he would be attracted to them while swimming underwater.

That plan, too, never got off the drawing board.

bull , bull, and only bull

The same propaganda has been launched against Qadafi,Amaricans are can only decieve thr own stupid mindless people not us

Then people say that only stupid people are in Pakistan. How much money do you think these guys are making to come up with these brilliant ideas? Let us ask where di they graduate from or may they also have fake degrees!!!
You must log in or register to reply here.
Share:
Facebook Twitter Reddit WhatsApp Email Share Link
Sponsored Link