Bollywood and the Politics of Meat (New York Times)...

With the election of Narendra Modi as the prime minister of India in 2014, I gained an identity that I hadn’t registered earlier: I am a Hindu meat eater. “When you slaughter an animal, then the color of its meat is pink. This is what they call a ‘Pink Revolution,’” Mr. Modi said at a rally leading up to his first election victory. “Across the countryside, our animals are getting slaughtered.”

Until then, my consumption of meat and fish and eggs felt like something personal and insignificant, like my fondness for the color blue. Now, I realized, it was a defining choice: I am not among the “our” the prime minister spoke of. I was the “they” who consumed meat.

But Mr. Modi’s “they” is essentially a dog whistle against Muslims, who are seen as meat eaters in vegetarian Hindu India. Data from Indian government sources reveals how patently false this dichotomy is: India’s National Health and Family Survey in 2015-16 showed that around 70 percent of Indian women and around 80 percent of men consume meat, fish or eggs, far more than the population of 14.2 percent Muslims recorded in the last census, of 2011.

Yet the fault line around meat has shaped a murderous course of events in India particularly around beef, which upper-caste Hindus, who consider cows holy, eschew. Human Rights Watch reported that 44 people were killed between 2015 and 2018 on the suspicion of transporting cows to be sold for meat, 36 of them Muslims. I find myself refraining from eating meat when I travel alone or am in unfamiliar places.

India’s rightward shift, and the ascendance of Islamophobic politics in the garb of cow protection and vegetarianism, was soon reflected in Bollywood. In “Manikarnika: The Queen of Jhansi,” a 2019 Bollywood biopic of Rani Laxmibai, a 19th-century Indian princess who fought against Britain’s colonial army, soldiers snatch a calf to kill for steak. Rani Laxmibai, played by the film star Kangana Ranaut, rescues the calf and offers a lesson: “Learn to respect the people, and the sentiments of the land you are standing on,” she says. The film was a box-office success.

The biggest Bollywood hit in 2018 was “Padmaavat,” a retelling of the story of a mythical Hindu queen tailored for an era of Hindu nationalism. In the film, Queen Padmavati chooses suicide over capture by Alauddin Khilji, a 14th-century sultan of Delhi, after he defeats her husband, a Rajput king, in battle.
Food bolsters the lustful, villainous portrayal of a marauding Muslim king. The manic Sultan Khilji, with long hair and a battle-scarred face, bares his teeth as he chomps on massive chunks of meat. Queen Padmavati’s husband, by contrast, eats from a plate and several tiny bowls. The camera never comes close enough to show us what he is eating, but his dainty bites suggest it is not meat.

A few films have dealt with the politics of Islamophobic vegetarianism squarely. The most intelligent of these is “Mukkabaaz,” a love story of a lower-caste boxer and an upper-caste girl, directed by Anurag Kashyap. The film opens with the protagonist watching a WhatsApp video that shows a man being murdered on suspicion of eating beef.

The boxer responds to it casually, as if he is used to such blood lust on his phone — after all, several real-life incidents of lynchings have been recorded on video and shared across Indian social media. Later in the film, when the boxer is invited to his lower-caste coach’s home to eat meat, a bunch of thugs barge in and beat both men savagely.

Mr. Kashyap, the director, does not specify whether the meat was beef, but the coach is a Dalit, and Dalits, the most marginalized caste, do eat beef. “Mukkabaaz” channels the unanswered questions around the lynchings over suspected beef eating and asks: How can a freedom as fundamental as what we eat be taken away?

A rare, stunning film about rising Islamophobia in India, “Mulk,” which is written and directed by Anubhav Sinha, begins with the birthday celebration of the father of a large Muslim family. The film spends a few deliberate moments inhabiting the cooking, smelling and eating of meat. A lovely dig at Hindu vegetarian pretensions follows as the father teases his meat-loving Hindu neighbor and friend with a plate of meat, knowing that he cannot admit to eating meat in public.

There is a peek at meat again in Mr. Sinha’s most recent movie, “Article 15,” a powerful examination of the caste system that won critical and commercial success. The protagonist, an earnest Brahmin policeman investigating the rape and murder of two lower-caste girls, gags when he opens a shack and sees raw pink unskinned carcasses. The comment is sharp: The caste of pig-skinners lives next to this shack while the mutton-loving officer can’t bear the sight of carcasses.

Hindi film and politics have an old relationship. Before Indian independence, films made in Bombay were anticolonial. After India’s independence in 1947, the country’s leading movie stars, Raj Kapoor and Dilip Kumar, propagated the values of liberal democracy, secularism and inclusiveness championed by Jawaharlal Nehru, the first prime minister. Now there are a slew of films embracing the muscular Hindu nationalist worldview, and even the policies and projects championed by Prime Minister Modi. “Toilet: A Love Story,” for example, is about Mr. Modi’s mission to make India free from open defecation.

Mr. Modi himself has revealed a far greater crush on Bollywood than previous prime ministers, posing for selfies with stars and roping them in for government campaigns, such as an initiative to promote voting and a film to commemorate the 150th anniversary of Mohandas K. Gandhi’s birth. It is likely that this proximity is the impetus for films about toilet habits and food choices.

The Hindu caste system is structured around food. Food choices signify degrees of purity and pollution — meat, especially beef, is polluting and triggers base instincts. Vegetarian food cooked without garlic and onions is wholesome. 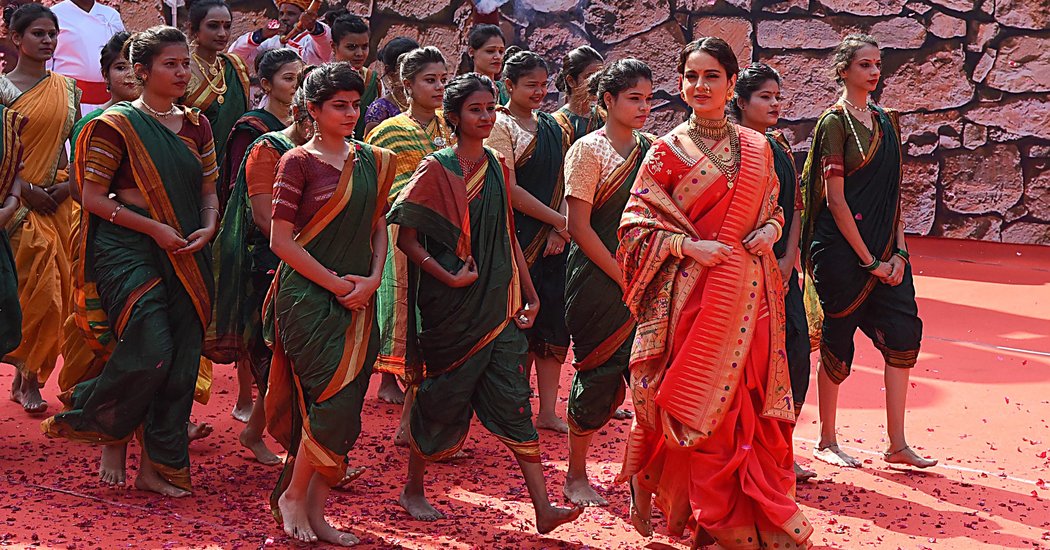 Opinion | Bollywood and the Politics of Meat

India’s Hindu nationalist turn and the ascendance of Islamophobic politics is reflected in the country’s films.

www.nytimes.com
When I first started noticing the references to meat a few years back, it felt fun even if inappropriate, as if the conversations I had with my grandmother on decent food were now public. But now it feels more instructive. This is the politics of the moment in India, with directives for both ends of our alimentary canal.
And some Hindi films feel like a warning, as if our prime minister is reminding us to behave ourselves — or else.
Sohini Chattopadhyay is a writer based in Kolkata, India.
The Times is committed to publishing a diversity of letters to the editor. We’d like to hear what you think about this or any of our articles. Here are some tips. And here’s our email: [email protected].
Advertisement

India is in terrorists hands of Rss

Dilvaly said:
India is in terrorists hands of Rss
Click to expand...

On should make a distinction between Hinduism and Hindutva...

London terrorist is coming to his home for burial.
P

By that Logic Osama Bin Laden's body is in Indian Ocean hence India is his terrorist home?

Please stroke Trump's meaty hog someplace else. This forum is not meant for confused runts and losers with such less IQ that they deserve nationality of only the Indian Ocean itself. ??
Last edited: Dec 7, 2019

It all is a reminiscence of the pre-partition saga. As in the explanation of two nation theory, Iqbal also cited the fact of beef eating Muslims and non-beef eating Hindus.
One may try to draw differences between Hinduism and Hidutva, but the fact is that latter is more dominant in India-- Modi has been selected the second time.
You must log in or register to reply here.
Sponsored Link