Former finance minister Asad Umar returned to the Federal Cabinet on Tuesday after taking oath as the minister for planning development and reforms.

President Arif Alvi administered the oath to the PTI lawmaker in Islamabad.

The ministry of planning development and reforms was previously being headed by Khusro Bukhtiar who has now been given charge of the Petroleum division. Earlier, Omar Ayub was handling the petroleum division along with the energy division.

Umar had decided to quit the Federal Cabinet in April after he was removed as the finance minister. At the time, he was offered the post of energy ministry by Prime Minister Imran Khan.

Reports were rife for the last two months that a cabinet reshuffle was on the cards, and it was widely being reported that the PTI leader would return to the cabinet. 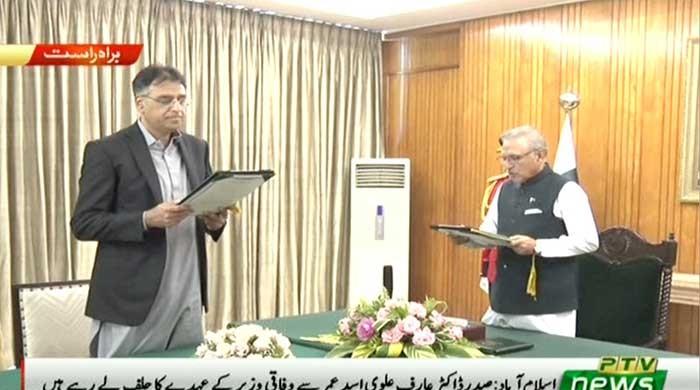 Good to see him back in the cabinet.
I hope now there will be no rift and tension between him and the Finance Minister.

Finally CPEC in safe and able hands.
I

Finally what I really wanted Asad umer to do!
With his ability to do things in a cleaner and efficient way, this job suits him the most.
He has this ability to think deeply into a matter and point out all the advantages and disadvantages of a matter makes him "the guy for the job". BOL.

Welcome Back.
You must log in or register to reply here.
Sponsored Link