A convicted/absconder while advising his political party members.

Good step. All institutions must work within their boundaries.

And how many actually believe these are the words of ganju himself.

trying to back peddle again.

Why our media give reports about this convicted corrupt criminal...shame on you...he statement, his tweets has no value for Pakistanis...we have thrown hin in dustbin of history...

PML-N Quaid says if required, meetings with military leaders would be held after party leadership’s 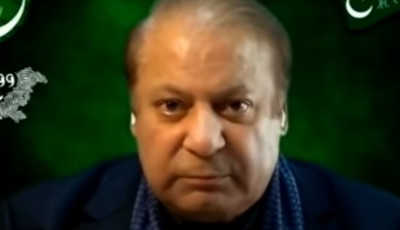 Amid a controversy set off by some off-the-book meetings of opposition figures with the military leadership, Pakistan Muslim League-Nawaz (PML-N) Quaid Nawaz Sharif on Thursday barred his party members and leaders from holding meetings with military or intelligence officials of the country.
“If warranted by national defence or constitutional requirements, then a meeting [with military, intelligence officials] would be held with the approval of the party leadership. And such a meeting would not be held secretly,” wrote Sharif in a series of tweets on his newly created handle.
Nawaz Sharif, who is currently in London for treatment of his undiagnosed illness, was allowed late last year by the government to fly abroad. However, he was declared proclaimed offender by the court after he failed to return to serve a seven-year jail term handed down to him by a court after convicting him of financial corruption.
Source
A

Why our media give reports about this convicted corrupt criminal...shame on you...he statement, his tweets has no value for Pakistanis...we have thrown hin in dustbin of history...
D