Says the Shiteater in chief of Wisden Cricket Bible (Phatwari Edition) so must be true.
V

Bewaqoof man. Must be a pmln supporter.
A

Oh My God! He remembers all the matches by heart after 28 years. But he forgot to mention that after winning the world cup in 1992 some players like Rameez Raja bowed down im Sajda but Imran Khan didn't. He forgot to mention that in his victory speech Imran Khan didn't thank Allah for winning the world cup. Every captain says that it was a team work but Imran Khan did not appreciate his team for letting him win the cup.
He satarted his speech with the sentence that at the end of his career he finally won the world cup. It was all about him.
K

Most of the team members themselves give max credit to kaptaan for the win. It was his self belief that pulled the team through.
N 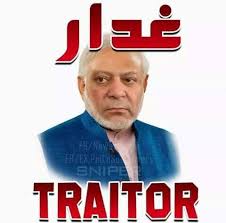